Jed McCaleb and Joyce Kim on Bitcoin, Stellar, and the Future of Money

Last year, Joyce Kim, Greg Brockman and I appeared on a Future of Money panel entitled “Stellar: Building a Common Financial Platform.” Joyce are I are Stellar.org’s cofounders, and Greg Brockman is a member of Stellar’s board. Commerce Ventures’s Dan Rosen moderates the discussion, inquiring about how Stellar Development Foundation got started, why it must be a nonprofit, and the wider social implications of a distributed payments network.

I’ve compiled an abbreviated version of the panel to make it easier to read quickly. Learn about the ethos behind Stellar, how it compares with Bitcoin, and how the protocol may develop in the future. 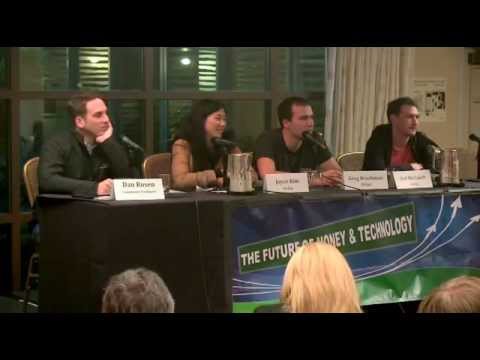 Jed McCaleb: When I first learned about Bitcoin, I was really enamored by it and always thought it was the awesomest idea. I spent a lot of time thinking about it because prior to that, I didn’t think such a system was possible. I’ve always been into distributed systems, but didn’t think a payment system without a central issuer was possible. Once I understood the implications of that, it’s pretty radical and it can actually change the world pretty dramatically, so I knew I wanted to do something in this space. I think BitCoin is a very much a first iteration of a decentralized payment network. Like with everything in software, there’s a first iteration then like people improve upon it and make better and better versions.

I was thinking about ways to improve upon Bitcoin and remove the mining, which I think is a big problem both in terms of environmental impact and economic impact. In trying to solve that problem I came up with this consensus method.

Greg Brockman: To build on that a little bit, one thing I think is really interesting about Bitcoin is that everyone talks about bitcoin as a currency. But Bitcoin is much larger than that. You start off with this digital currency that’s off by itself that is doing this thing, it’s got its own rules, its own sort of way being traded around and getting new pieces and that sort of thing. But as soon as you have to inter-operate with the rest of the world, suddenly you’re back in a world having all these exchanges.  And the same people who are on the BitCoin network and really excited about the decentralized nature are also on these very centralized exchanges and sort of each one, they don’t interoperate, they have their sort of rules, you have to do your own trust evaluation and that sort of thing. And so really, BitCoin is this ecosystem, I think it doesn’t make sense to look at any one piece of it.

It’s really about what’s the sort of sum of all the activities, all the things people have to build in order to make it all work. And soon as you’re in a world where you have to do this inter-operation, so you have to build these exchanges. You may as well build this into the protocol. And so I think that in a lot of ways, what’s Stellar really is, is it’s the minimum encoding of a financial system that can inter-operate with what’s already out there. And I think that no matter sort of how the rest of the digital currencies space evolves, I expect that we’re going to see more and more sort of adoption of this concept of “let’s standardize how all these other pieces work and actually try to bring them into the core protocol.”

Dan Rosen: Interesting. You’re definitely one of the few nonprofit startups I know. So, can you talk a little bit more about what that means on a practical day-to-day basis and maybe just a little bit about the mission and how you are pursuing that mission?

Joyce Kim: When we were deciding whether to be a nonprofit or a social B Corp, we looked at a number of different things. From a philosophical perspective, it was very much the right thing to do because when we look at infrastructure that is this core to how we live—I mean, money impacts us on a societal basis everyday. The type of infrastructure that touches us multiple times a day needs to be owned by everybody, and it needs to be owned by nobody. One of the reasons why we decided to make it nonprofit was to separate revenue motivation from the design of the protocol.

Greg Brockman: I think that when you think about any sort of core protocol of the internet, that you really do need to have a story for why this isn’t going to just be twisted to one company’s needs, that there isn’t going to be some entity out there who’s going to try to put their owns need before sort of making a protocol that’s really successful and giant.

Having a custodian that is very clear what they’re doing, what their motivations are, what the rules are that they’re bound by certainly makes [Stripe] really comfortable and excited about working with Stellar. And I think that it provides a story for how this becomes larger than something that’s just a couple of companies really come something that’s a universal protocol.

Joyce Kim: I read a lot of studies about how financial access plays out in the developing world and in communities where there’s not a lot of financial services to begin with. And what these studies have shown is that financial access is never alone: it has to be paired quite closely with education. And for the entire digital currency space to move forward or for financial access to reach that next level, there has to be an organization that’s focused entirely on education of consumers and companies and government officials and whoever the case may be on how these things work, the pros and the cons, and being a non-profit allows us to focus on that quite heavily as we move forward.

Greg Brockman: I actually think that one of the great things about the approach of making it accessible and easy is that it goes from being as abstract concept. It’s a little bit scary actually if you just hear about this like weird, like digital crypto something, something in the Cloud. Who knows what that is? But then when you actually get it, and you see the rocket go, you just realized that, “Oh, this is what it’s actually doing.” I think it makes it a lot more friendly. And I actually think that’s a really important thing not just for Stellar, but for crypto-currencies generally.

Dan Rosen: what countries are your biggest countries?

Joyce Kim: After the US and Europe, it’s Indonesia, Vietnam, Philippines, Singapore, Mexico, like along those lines. Countries that you see that are developing world economies that have a strong middle class, have strong mobile penetration, like Indonesia and Philippines, they’re both island nations which means mobile penetration is much faster than regular internet. Vietnam is this funny edge case, so like two-three days after we launched, our Vietnam numbers started to go crazy and we’re like, “What is going on?” So we were getting all these emails in Vietnamese and for any of you that have tried to use Google Translate for Vietnamese, it really sucks. So we’re getting emails that made no sense. And then finally some of the users spoke English and we were asking them “How did you find out what, what’s going on?” And they all pointed us to this one particular guy on Facebook who is a poet/ journalist in Vietnam who has a million Facebook followers, respected journalist.

Journalists, they’re great people around the world. And he translated all of our launch material into Vietnamese, and then he published it on his Facebook feed, and in one fell swoop, we hit the tech NPR audience of Vietnam and it just took off like wildfire there. And, it took us like four or five days to figure that out and, meanwhile, we’re staring at these numbers and getting all these emails and not knowing how to communicate yet. So, it was an interesting… Dipping our toe into learning how things move in other countries and realizing like the blind… We have a very diverse team in terms of country distribution, but we still have blinders ’cause we’re all still tied to Silicon Valley somehow.

Dan Rosen: In general either technically or business-wise, what’s been the most challenging aspect of, the first four or five months of this business?

Jed McCaleb: Technically, by far the biggest challenge has been scale. I mean, this is the first time this kind of technology has been stressed to this limit. So, we’ve been kind of scrambling to, like, keep up with the load. We’re doing a major refactor of the code base right now just to deal with this level of scale, so that’s certainly the biggest challenge.

Joyce Kim: We always have this thesis that money is culture. How we pay for things here is different than how I pay when I’m in Korea, which is different from how I split the bill with friends in Europe. So we knew there was an intense amount of localization that had to happen, but when your audience is already global three days out and your team is sitting in an office in San Francisco, we weren’t ready for that, and we’re scaling up on that side of it now. We have to really get more boots on the ground in countries where we’re seeing a lot of users, and understand what are the specific problems in their countries. In Indonesia, it’s something like less than 15% of the population has credit cards, so what happens then, and why they’re using Stellar.

Greg Brockman: And I think one thing that’s important to keep in mind with Stellar is how early it is. And I think that for sort of introducing any big shift or any sort of new piece of technology or something you want to be successful, I think that there’s no question that it’s a long haul. You really have to be ready for this slog, where 90% of the work of building something is always all of the sort of little grungy details that aren’t the kinds of things that anyone wants to listen to on a panel like this. And that’s really what most of the work is.
The thing with BitCoin I think is interesting is that it’s been this very iterated process over many years to get people more and more aware of it, and though I think there’s a lot of good stuff going on in the BitCoin community, though I think that there’s still a lot of shortcomings. And I think that the upside case with something like Stellar is that it’s able to address those sort of shortcomings. I think that the good outcome or a really cool place to be would be one in which you can kind of mesh all these things together and you end up with an ecosystem that’s way more valuable than any pieces would be on their own.